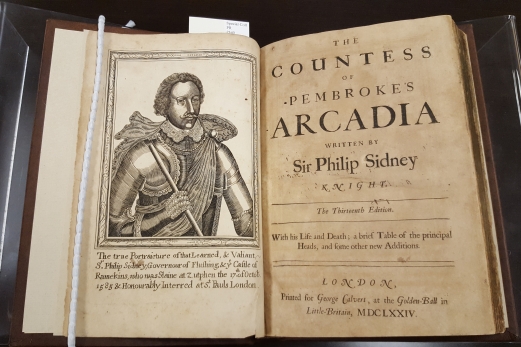 This is the thirteenth edition of The Countess of Pembroke’s Arcadia (simply known as the Arcadia) and was first written by Sir Phillip Sidney towards the end of the 16th century. This particular edition was printed at the Golden Ball in Little Britain in 1674. The romantic inscription inside reads:

“Judith Tichborn Her Book Given me [?] by my most renowned and Beloved knight Stephen de La Stanly: 1713.”

Nothing is known about the giver of the book, Stephen de la Stanly. However, some info can be found about the writer of this inscription. Judith Tichborn (or Tichborne) was born about 1685 to Benjamin Tichborne and Elizabeth Gibbs in Tichbourne, Hants, England. On December 16th, 1717, at age 15, she was married to Charles Spencer the 3rd Earl of Sunderland and became Lady Sunderland. Their marriage was mentioned in a letter from Henrietta, Countess of Suffolk to her husband, the Honorable George Berkeley:

The phrase “without a groat,” which means “a small sum,” implies that Judith brought a nice sum of money to the marriage. Other sources indicate that she was an Irish heiress. The family of Lord Sunderland also had something to say about the marriage. Sarah Churchill, former mother-in-law to Lord Sunderland, criticized his bride as being too young and has “no experience as to family keeping or accounts.” In any event, the couple were married and had three children, all of whom died young. Charles Spencer died in 1722 and was buried with one of their children who had died around the same time. On December 10th, 1724 Judith married Sir Robert Sutton who was the Director of both the South Sea Company and the Charitable Corporation. Judith eventually died on May 17th, 1749 from a fever, after recovering from smallpox.

Suffolk, Henrietta Hobart Howard. Letters to and from Henrietta, Countess of Suffolk, and Her Second Husband, the Hon. George Berkeley: From 1712 to 1767, John Murray, 1824.

This site uses Akismet to reduce spam. Learn how your comment data is processed.

This work is licensed under a Creative Commons Attribution 4.0 International License.